Advances in our understanding of ACL injuries have led to major changes in the management of these injuries over the last decade.

These improvements include surgical techniques and an advanced understanding of ACL rehabilitation. The aims of this guide are to provide you with information about ACL injuries and the management options that are currently available.

What is the ACL? 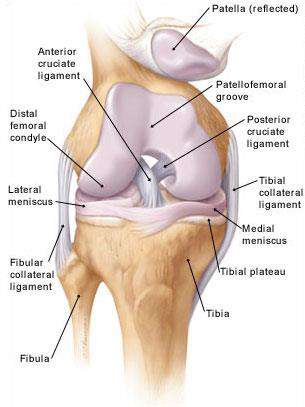 The knee joint is a complex joint that relies upon its surrounding ligaments and muscles for stability. The knee joint is able to flex (bend) and straighten (extend) and is also able to slightly rotate. The ACL is one of the four primary knee ligaments which connect the bones of the femur (upper) and tibia (lower leg). Ligaments are strong fibrous bands which are composed of connective tissue bundles known as collagen fibres.

What is the anatomy and function of the ACL?

The ACL originates from the back of the femur (thigh bone) and runs diagonally through the centre of the knee to the front of the tibia (shin bone). The Posterior Cruciate Ligament (PCL) runs in the opposite direction and the two ligaments cross near the centre of the knee. Together, these two ligaments provide stability for the knee by controlling the amount of forward and backward movement of the tibia underneath the femur, and the degree of rotation at the knee. Both ligaments are vital in activities or sports requiring fast changes in direction, pivoting and twisting motions.

How is the ACL injured?

The ACL can be injured indirectly or directly.

What are the signs and symptoms of an ACL injury?

How is an ACL tear diagnosed?

ACL tears can be diagnosed by several methods. A clinical examination by your consultant will usually make the diagnosis. Clinical tests such as the Lachmans (below) and the anterior draw test can be used to assess the integrity of the ACL. In the early stages following injury, the knee can be very painful and swollen and this can make examination difficult.

An MRI (Magnetic Resonance Imaging) scan may be performed to reinforce the clinical diagnosis and assess the damage to the ACL, as well as the other ligaments and cartilage.

Why does the ACL commonly fail to heal?

Unlike the other three ligaments around the knee joint, the ACL often fails to heal naturally. Because of the location of the ACL, bleeding following an injury to the ligament is uncontained and fills the joint, creating pain and considerable swelling. The blood irritates the lining of the knee joint causing synovial fluid to be produced. The function of the synovial fluid is to dissolve and prevent blood clotting within the joint, but if blood clotting doesn’t occur, then scar tissue cannot form. If scar tissue is unable to form, the body is unable to heal the ligament and so the ACL fails to heal.

What is the treatment for an ACL tear?

Once the initial symptoms have subsided and you have received a diagnosis, your orthopaedic surgeon will decide and discuss with you which treatment will be best for you.

The two main factors that will be considered are:

Non-operative management of an ACL injury

Early after the injury a physiotherapist can help reduce pain, swelling and stiffness in the knee. They can also help improve confidence in walking and regain trust in the knee. A large part of physiotherapy management is then addressing any muscle weakness present around the knee, spine and pelvis and any deficits in ‘proprioception’. Proprioception is a mechanism whereby nerve endings within the ligaments and muscles send information to the brain about knee joint position sense. It is essential for good stability and balance of the knee and is disrupted if the ACL is injured.

Proprioception can be re-trained using exercises designed to test your balance and coordination. Good muscle performance and enhanced proprioception are both key factors in a successful conservative approach to ACL injury.

Adjustments may be required to daily activities and sports whilst having physiotherapy and a carefully graded progression back to competitive sports will be planned, if that is your goal. Sometimes it is a good idea to wear a supportive knee brace to provide extra stability when returning to sports.

Surgical management of an ACL tear 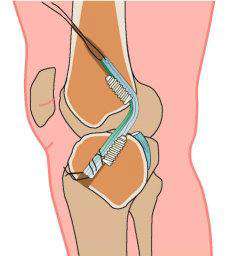 You and your surgeon may decide that reconstructing your ACL is the best way forward. If that is the case, it is important to know that it is very rarely necessary to perform the surgery as soon as possible. Unless there is significant damage to other structures in the knee, then the best time to rebuild the ligament will be once the knee has recovered from the injury. The time it takes for the knee to recover movement, and for the pain and swelling to go, will vary from person to person but is usually in the region of four to six weeks.

Please don’t feel that this wasted time. It is part of your recovery and a little patience in this phase may well save you a lot of time in the long run. The surgical method used during your operation is called an arthroscopy. A small fibre optic camera is inserted through two small incisions on either side of your kneecap tendon.

The camera allows the surgeon to accurately view your knee joint and perform the surgery with minimal disruption to the knee. The procedure is normally performed under a general anaesthetic and surgery will take approximately 1 hour, either as a day case or with an overnight stay in hospital.

The remains of the damaged ACL are firstly removed and then a new ligament is formed, using an alternative soft tissue known as a graft. The graft is commonly formed from the patient’s own hamstring tendons and is known as an autograft. Strands from one of the smaller hamstring muscles (called Semitendinous and Gracilis) are used to create the new ACL graft. Occasionally, your surgeon may choose to make the graft using a small portion of the patellar tendon instead of the hamstrings. The patellar tendon is a strong tendon that is positioned just below your knee cap and attaches the quadriceps to the tibia.

Tunnels are created in the tibia (shin bone) and the femur (thigh bone) to allow the graft to be positioned correctly across the knee. The new reconstructed ligament is then threaded through and fixed securely at both ends with screws.

What will happen following the operation?

When will I see my consultant following the ACL operation?

Complications following ACL reconstruction are pretty rare. However, they include:

WHAT OUR PATIENTS SAY ABOUT THEIR ACL SURGERY

“Thank you. Jonathan was very helpful this morning, I understand much better now the condition and how to best recover which gave me a real lift.”

“On a personal note, please can you pass on to Jonathan that I could not recommend him enough in not just his interest and care in me but the manner and time he spent with me.”